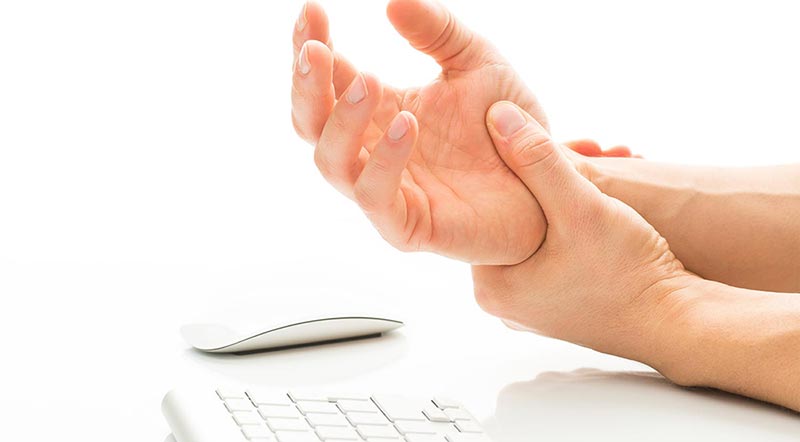 A few years ago, I started noticing a dull pain in my right wrist whenever I used a computer mouse. At first I ignored it, but the pain persisted and began to travel up my forearm. Eventually the outside my wrist became noticeably sore and the pain began to makes its way up through my upper arm. On bad days, my arm felt like it was sunburned, I had a sharp pain in my wrist, and I could not use a mouse or keyboard.

This post talks about my experience with RSI (Repetitive Strain Injury) and how I manage it while working as a web designer and developer.

Before we go any further, here’s a fun disclaimer! I’m Pretty Sure™ I have some form of RSI and not carpal tunnel. I haven’t been diagnosed by a specialist. If it doesn’t go without saying, nothing that follows constitutes as medical advice. But you’re smart enough to know not to take medical advice from a fucking web designer who's blogging, right? Ok then.

I decided to write this after reading Adam Morse’s tale of RSI. His case sounded pretty severe, but you don’t need to live in San Francisco or be in front of a screen 24/7 to develop RSI. This can happen to anyone.

Over the last 15 years, I’ve spent a lot of time using non-ergonomic equipment. Non-adjustable office desk. Limited range chair. Standard issue laptop, mouse, and keyboard. Over time, this setup lead to a good deal of pain in my right wrist (my mouse hand). The pain gradually grew until I couldn’t use my mouse for more than 10 minutes. I’d heard of folks in our industry developing wrist pain, so I resisted the urge to power through and do real damage to myself.

First, I spoke to a physical therapist friend, who gave me an unofficial RSI diagnosis. After running me through a battery of stretches and a heat lamp, he suggested I ice my wrist nightly, taught me a few stretches, and sent me on my way.

Around the same time, I encountered a coworker who had battled RSI (he was officially diagnosed). He lent me an upright mouse, ergonomic keyboard, and a book with more stretches.

I’d be lying if I said I didn’t research this on the Internet, too. Yes, a lot of it is conjecture and anecdotal evidence, but a few commonalities emerged. Common stretches, better equipment, posture advice, stuff like that. I took it with a grain of salt.

I should have gone to see a specialist, but wanted to avoid copays and medication. Instead, I focused on the advice I’d gotten so far. Every night, I iced my wrist for 20–30min before sleeping in a brace. The following day, I would stretch several times with elastic bands. I was already going to the gym regularly, but I doubled down on things like pull-ups, arm hangs, and wrist stretches. I used the upright mouse (with a wrist cushion) and an ergonomic keyboard. I adjusted my chair as high as it would go (still too low, but better than before). I moved around the office instead of sitting at the same desk for hours. I took breaks when I noticed the pain creeping in.

At first these things didn’t seem to make a difference. But after about two weeks, I turned a corner. I got used to the mouse. I could work a little longer before the pain set in; when it did come, it would subside faster.

Eventually I was able to drop the ice and brace. I also ditched the keyboard; I never did get used to it. But everything else I kept and do to this day. I stretch every day. I own three upright computer mouses. I’ve since changed jobs and was fortunate enough to be offered an adjustable standing desk that I can set at the perfect height.

These days I’m rarely in any pain that lasts for more than five minutes. I don’t have to take extended breaks away from the computer. I never took medication. My RSI doesn’t seem to be getting any worse. Most importantly, I never had to consider changing careers.

Sometimes we web designers get so into our work we power through and don’t realize we’re hurting ourselves. I’m not going to offer any medical advice (I’m still just a fucking web designer). But if you notice a dull pain starting to grow in your arm or wrist, it’s probably best not to ignore it.